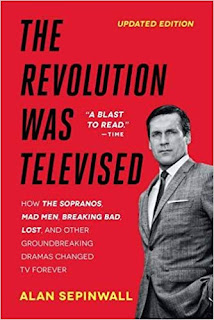 The Revolution Was Televised: The Cops, Crooks, Slingers, and Slayers Who Changed TV Forever by Alan Sepinwall


The day before yesterday was the first official post here at TV Churches. Sure, last month we shared a couple of posts about television from our other blogs, but that post was the first one written specifically for this blog.

You might have noticed, though, that it was posted April 1st. Not everything in the post was strictly -- well -- true. For instance, I said that reading is always better than television, and I don’t really believe that. We like television very much. We also enjoy books, though, and a regular feature in this blog will be reviews of books about TV (and TV novelizations).

A major theme in Movie Churches, our other blog, is how the depiction of clergy and churches has changed through the years. In the days of the big studios and the production code, clergy were almost always shown in a positive light. With the end of the production code and the beginning of the rating system in the 1960s, the portrayal of clergy (and the church) became much more critical.

A similar change happened in television, and that change is chronicled in Alan Sepinwall’s entertaining book, The Revolution Was Televised. Sepinwall features twelve different TV series (while mentioning many others) and describes how these shows led to more complex and adult drama on television. Back in the days of, say, Jack Webb (Dragnet, Adam 12, Emergency), characters in television were either good or bad, heroes or villains. Every problem was solved in the 30 to 90 minutes allotted by the sponsors. In the 1980s, programs such as Hill Street Blues and St. Elsewhere showed cops and doctors who made mistakes and weren’t always pure of heart.

Sepinwall claims the shows he features (Oz, The Sopranos, The Wire, Deadwood, The Shield, Lost, Buffy the Vampire Slayer, 24, Battlestar Galactica, Friday Night Lights, Mad Men, and Breaking Bad) took television to a higher level of quality and allowed for a more sophisticated examination of human nature --which also allowed for a more complex portrayal of issues of faith and religion.

The book is an in-depth examination of the content of these groundbreaking programs and features interviews with creators and producers. The first shows examined were on HBO, so censorship wasn't often debated, but later cable and network shows faced challenges about what language and behavior could be brought to the small(er) screen.

Generally, when people think about censors and television, they’re thinking about sex, violence, and profanity. But the networks were also sensitive to the portrayal of religion on television (for example, CBS was leery about letting Linus read from the book of Luke in the Charlie Brown Christmas special).

Is the portrayal of church and clergy better or worse in this new, 21st century age of television? That’s what we’ll be trying to figure out by examining TV programs before and after Sepinwall’s revolution.

This month, we’ll be looking at preachers in Westerns from the wholesome days of Bonanza to debauched West of Deadwood. Rest assured, we won't just be reading about television. We'll be watching it as well. (And contrary to what we wrote yesterday, we expect to enjoy the watching.)
Posted by churchandstates at 7:58 AM

Email ThisBlogThis!Share to TwitterShare to FacebookShare to Pinterest
Labels: books