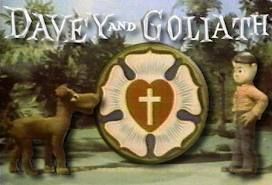 I went to a seminary with students from a variety of denominations: Baptists, Episcopalians, Presbyterians, etc. I even knew a few people from the Evangelical Free Church, the denomination that founded the seminary. Many of those folks from other denominations had to attend additional classes at their denominations' schools. I remember Mark coming back from a class at his Lutheran seminary. “We spent the whole night watching Davey and Goliath,” he complained.

I can see why Lutherans were proud of Davey and Goliath. The United Lutheran Church in America worked with Clokey Productions to make a syndicated program for children. (Art Clokey animated clay figures -- most famously with the adventures of Gumby and Pokey --  in a process they called “Premavision.”) Five seasons of Davey and Goliath were produced from 1961 through 1973, with holiday specials made through 2004.

The program was always syndicated, but sometimes it was aired through sponsorship of the Lutheran Church and sometimes stations would play the program as a part of the FCC’s community service requirement. Kids watching the show back in the pre-cable/streaming days didn’t know this, though. Davey and Goliath was just TV, like anything else. A lot of kids loved the little boy, Davey, and his talking dog friend, Goliath. (It was amazing that the dog could talk, but perhaps only Davey understood him. It was amazing any of them could talk; their mouths rarely moved.)


During each fifteen minute episode of the series, Davey would deal with a situation, often including a moral dilemma, with the help of his trusty canine friend. Though a church production, most episodes of the program didn’t feature the church or clergy. But since that’s what we feature here at TV Churches, we found an episode that did. 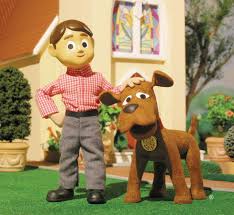 Like every episode, “One Happy Family” opens with the theme music, “The Church’s One Foundation.” We see Davey and his parents and his sister Sally talking to Pastor Miller (wearing a black robe and cross) in front of their church. All of them are excited about the next week, when Davey will be taking his first communion.

Davey’s friend, Jonathan is also at church, and he also will be taking his first communion the next week. Both boys are quite excited about this, and they share their excitement with their friend, Cisco, who comes walking down the street in front of the church. Cisco says, “Communion, who cares?” His mynah bird JoJo also says, “Communion, who cares?”

Davey and Jonathan are greatly concerned that Cisco doesn’t want to take communion, so they spend the rest of the episode figuring out how to convince him communion is good. (Everyone else in the town seems to be Lutherans with good memories of their first communion. Davey talks with a police officer and grocer who both have stories to tell.) For what it’s worth, the church seems to be ethnically diverse. Davey is white (so very white), but his friend Jonathan is African American and Cisco is Hispanic.

Before the next Sunday, Pastor Miller comes to meet with Davey and his family to be sure that Davey understands the sacrament of communion. The pastor discusses the bread and the wine as a symbol of Jesus’ death on the cross and unity of the family of Christ. He asks if Davey has any questions, and Davey replies he wonders what the wine and bread taste like. To his credit, Pastor Miller doesn’t call this a stupid question but promises to bring Davey samples before communion. Which he does. So good on Pastor Miller.

Oh, and as for Cisco (short for Francisco), he does end up taking communion after Davey’s parents take an interest in caring for him and his invalid grandmother -- which say good things for the church and the people of it.

All of these good things contribute to a 4 Steeple rating for Pastor Miller (and the church) in Davey and Goliath. (Bonus points for his name; one of my first pastor's was Pastor Bill Miller, a great guy.)
Posted by churchandstates at 9:23 PM No comments: