Deadwood: Did they really say that back then? 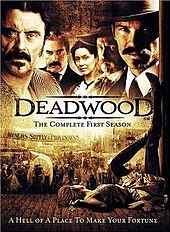 If you wanted to see the contrast between old and new television, how things have changed over the last half century, there would be no clearer division than an episode of any classic Western series -- something like NBC’s Bonanza, ABC’s The Big Valley, CBS’ Gunsmoke, and any episode of HBO’s Deadwood.

The West of the broadcast networks was a picturesque landscape on which to enact clear-cut morality plays. The West of premiere cable was a dirty, sordid place where it was never quite clear who you should be rooting for from episode to episode. Sure there were killings (a lot of killings) on network Westerns, but not the bloody, gruesome slayings found in Deadwood (and I’m nearly positive Matt Dillon never got rid of a body by feeding it to the pigs). There’s also the nudity and the sex and the profanity… There has never been a program with as many F-Bombs, along with S-Bombs and C-Bombs, as Deadwood. Yeah, we’re not on the Ponderosa anymore.

Deadwood is about the founding of a small, lawless town in what would become the state of South Dakota. Most of the characters are based on real people such as Wild Bill Hickock (Keith Carradine), Calamity Jane (Robin Weigert), Jack McCall (Garret Dillahunt), and Seth Bullock (Timothy Olyphant) who are well known in Western lore, along with lesser known characters such as Al Swearengen (Ian McShane), E.B. Farnum (William Sanderson), and Charlie Utter (Dayton Callie), who have were also part of the early days of the real community. What matters most for this blog, though, is the Reverend Smith (Ray McKinnon), the town preacher of the first season who is also based on a historical figure. 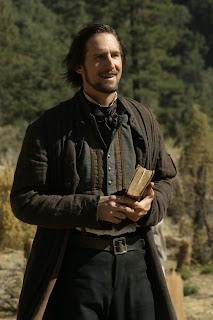 The pastors we've looked at so far in Westerns were one episode wonders, but the Rev. Smith is a minor figure throughout the first season. He's based on a real resident of early Deadwood, Henry Weston Smith, a Methodist minister from the East. Most people came to the Black Hills for riches from mining for gold, or riches earned from gold miners. Smith came to save souls. He was the first minister of any denomination to serve in the Black Hills. Previously he had served as a doctor for the Massachusetts 52th Infantry in the Civil War.

In 1876, Smith moved to Deadwood and began street preaching, working odd jobs to make his way. He seems to have been a respected member of the community, though he died that same year. There is controversy about how he died -- according to an account by Seth Bullock, Smith “was killed by Indians," but there were rumors that he was killed by thieves and other rumors that he was killed by owners of the casinos or saloons or brothels who may have feared Smith’s preaching would hurt business. In HBO's Deadwood, he's killed in a very different way for very different reasons.

On the program, most seem to regard the Reverend H.W. Smith as a nuisance, though he does serve an important function in the community. After the death of Wild Bill Hickock (and if you want to complain about spoilers, you really should read more history), Smith pesters Bullock and Seth’s partner Sol Starr (John Hawkes) about what hymn and Scriptures he should use for the funeral service. He finally decides on “How Firm a Foundation” and I Corinthians 12.

The show’s creator, David Milch, has admitted that he considered that passage from the Bible central to the theme of the series itself. In that Scripture, Paul wrote to the Church about the Body of Christ to remind them that every person has an important role to play. Milch believed that the miners, shop keepers, and innkeepers had a role to play in Deadwood, but the town was also shaped by the prostitutes, gamblers, and gunmen.

The Rev. Smith of the show is suffering from some kind of brain tumor -- he’s dying. In the "Plague" episode, Smith is called to join the leaders of the town facing an outbreak of smallpox. Swearengen, a saloon keeper, takes charge, asking business leaders to contribute funds to get a vaccine from a neighboring town. He tells the newspaper publisher, A. W. Merrick (Jeffrey Jones) to publish an issue to quiet any panic. The Rev. Smith says that he’ll quell any apocalyptic fears and try to prevent sufferers from being stigmatized.

At the end of the meeting, the Reverend has a seizure and passes out. Doc Cochran (Brad Dourif) takes care of the pastor. Smith describes seizures he’s had in the past (“I smelt a peculiar smell, as if something was burning.”) But the doctor gives the reverend clearance to help care for patients in the quarantine tent. The Doc asks, “Are you sure you’re up for this?” and the Rev responds, “Oh yes, I’m right where I’m supposed to be.”

I won’t tell the end of the Reverend’s story on the show, because that isn’t historical and would involve spoilers. But throughout the show he is presented as one of the few truly good people in town, putting the needs of others before his own. Therefore, I’m giving the Reverend H.W. Smith our highest TV Churches rating of 4 Steeples.

Two bonus bits of business about Deadwood. In 2016, Mindy and I were able to visit the town of Deadwood and see a monument to the real Reverend Smith. And this year, 2019, HBO will release a new Deadwood movie, which might tie up some plot lines that were abruptly left hanging when the show was canceled after three seasons in 2006. Sadly, unless they add a supernatural element, I don’t see the Reverend Smith making an appearance.) 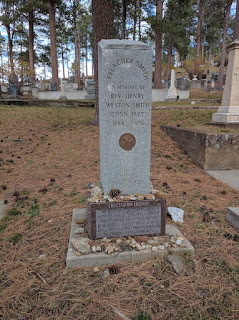 Posted by churchandstates at 9:20 PM