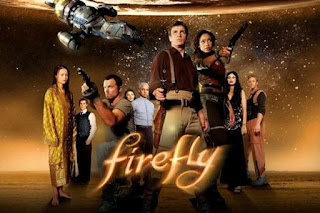 For the last three weeks, we’ve been looking at churches and clergy on westerns (Bonanza, The Big Valley, Deadwood), and we're concluding with a program some not might think of as a western at all. They're right; Firefly, created by Joss Whedon of Buffy the Vampire Slayer fame, can quite correctly be classified as science fiction. But if you look at the themes of westerns -- lawlessness vs. civilization, independence vs community, frontier living -- Firefly's a western even though it takes place in space.

Firefly lasted only one season, from fall 2002 through spring 2003. I was among the few watching the show, but there weren’t enough of us to keep the show on the air. After the series ended, the show gained cult status -- first through DVDs and then through streaming. The fan base became large enough for Universal to invest in a feature film, Serenity, to wrap up some of the show’s unresolved plot lines.

Firefly, set sometime in the distant future, is the story of an outlaw band who take whatever work they can find (legal or otherwise) to keep their spaceship, Serenity, moving. Mal Reynolds (Nathan Fillion) is the captain, cast from the western mold of a tough guy with a heart of gold.

Also on the ship, though not part of the crew, is the traditional western hooker with a heart of gold, Inara (Morena Baccarin). She's a passenger who, because of her status as a very respectable "Companion," provides the entire enterprise with a degree of legitimacy. Wash (Alan Tudyk) is the ship’s pilot and Kaylee (Jewel Staite) her mechanic. Zoe (Gina Torres) and Jayne (Adam Baldwin) provide the muscle for Mal’s jobs, which, in the western tradition, included a train heist and a cattle drive.

The most interesting passenger on the ship -- in the view of this blog, anyway -- is a pastor, Shepherd Derrial Book (Ron Glass). Book doesn’t have an official capacity on Serenity, but pays his way to travel. “Shepherd” is apparently the honorific of the future, replacing “Reverend," "Pastor," or "Father" (though folks do call him "Preacher" on occasion). Captain Reynolds often claims to have no use for religion, but he seems to genuinely like and respect Shepherd Book. Actually, pretty much everyone on the ship seems to like and respect Book.

Though the episode “Jaynestown” doesn’t give Book a role central to the plot (which deals with Jayne returning to a mining planet where he has inexplicably become a folk hero), Book’s secondary plot line is great fun. The other two paying passengers on the ship, Doctor Simon Tam (Sean Maher) and his sister River (Summer Glau), are fugitives from the government forces which made River a human guinea pig. The experiments gave River some extraordinary abilities in addition to her own remarkable intellectual prowess but left her mentally unstable. 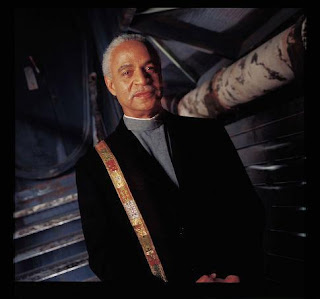 In this episode, Shepherd Book agrees to watch River while Simon joins the rest of the crew on a mission on the mining planet. (“Go out, son, see the sights. I can watch your sister. I think the two of us have established a rapport. Go on. I’m a shepherd after all. I can look over a flock of one.”)

When he checks up on River, Book finds her with a pen marking up his Bible. He quietly approaches her.

Book: What are we up to, sweetheart?

River: So we’ll integrate non-progressional evolution theory with God’s creation of Eden. Eleven inherent metaphoric parallels already there. Eleven. Important number. Prime number. One goes into the house of eleven eleven times, but always comes out one. Noah’s ark is a problem.

River: We’ll have to call it early quantum state phenomenon. Only way to fit 5,000 species of animals on the same boat.

Book: It’s not about making sense. It’s about believing in something. And letting that belief be real enough to change your life. It’s about faith. You don’t fix faith, River. It fixes you.

I loved this interaction. It creatively placed an argument about the authority of Scripture in network prime time and allowed each side of the debate to make decent points in a creative way. Usually, if there's any debate about theology on television, there is a good side and a bad side, and only one side gets to come out looking good.

A little later, River is terrified when Book, after washing his hair (which is usually pulled back into a tight ponytail) looks up with his long white hair loose -- looking a little like pictures of Albert Einstein. Apparently not cutting his hair is a part of the vows of Book’s religious order. In fairness, Zoe admits to being alarmed by his hair, too.

One of the things I love about the portrayal of Shepherd on this show is that he is a man of the Book, as his name implies. He is most certainly a Christian pastor in a futuristic setting. (Some creators working in science fiction imagine other, more "advanced" religions in the future. But Whedon chose to make Book a Christian.) He is a man of good humor, kindness, integrity, and strength and earns our highest rating of 4 Steeples.

Posted by churchandstates at 7:46 AM